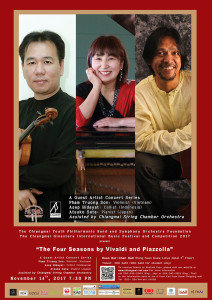 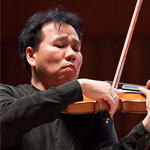 Winner of the first prize in the Chamber Music category at the Vietnam National Music Competition “Autumn” in 1993, violinist Pham Truong Son obtained his Master of Music degree from the Vietnam National Academy of Music under the tutelages of Dr. Do Xuan Tung and Professor Ngo Van Thanh. From 2009 to 2013 he studied at the Barratt Due Institute of Music in Oslo. In 2014 he studied chamber music with Professor Edward Schmieder of iPalpiti International and concertmaster of the Los Angeles Philharmonic Martin Chalifour in 2014. He also studied with Nobuko Imai, world leading violist.

A prolific performer, Mr. Son has performed in Suntory Hall and Opera City Concert Hall in Tokyo, Japan, Leo Frankel Concert Hall in Bervelly Hills, USA and number of concert halls in Europe, China, Indonesia, and Thailand. He has appeared as a soloist with the Hanoi String Orchestra and Hanoi Philharmonic Orchestra. He was a member of the Asian Youth Orchestra in 1993 and 1994 and has served as co-concertmaster/principle second of the Hanoi Philharmonic Orchestra since its inaugural season in 1997.

In 2009, Mr. Son founded Song Hong Chamber Music and it has now become one of the leading chamber ensembles in Vietnam. Song Hong has given hundreds of concerts in most of the major cities in Vietnam and went on several tours in Thailand, China, Indonesia and the United States.

Mr. Son is currently on the violin faculty of the Vietnam National Academy of Music and head of the Chamber Music program of the String department here. He has served on the jury of the Thailand Mozart String Competition in 2011, He has judged and performed at the International Music Festival and Competition in Chiang Mai, Thailand in 2016. 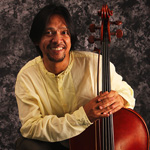 Asep Hidayat first studied cello at Middle School (1982) with Yoesbar Djaelani and continue study at Indonesia Institute of The Art (1986) with guidance Dutch cellist Rene Berman. Later he was granted a full scholarship from the Japanese Government to study of Master performance at Osaka Kyoiku under Prof. Aich Oki. Currently, he teaching at Indonesia Institute of the Art and in the stage completing his doctoral degree at the same institution.
As a Professional cellist, he actively play repertoire ranging renaissance era to contemporary music, as a soloist and with chamber music. He Joined the Australian Vistuoso Ensemble (1997) Heinrich Shultz Ensemble In Japan (1999-2002), and also was elected as adjudicator of the International chamber music competition in Baku Azerbaijan (2014).
He served as the artistic director of the annual Yogyakarta International Chamber music Festival (2010-2015). He has Completed 100 tours in Indonesia and Asia’s Big cities (2013) and Received the David Award from the Greek Government. 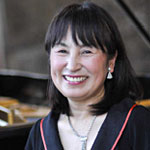 In 1977 Atsuko Seta graduated from the Department of Music, Piano Course, Osaka Kyoiku University. In 1978, she completed a Postgraduate Course, starting her career as a pianist, mentored by Argentine pianist Eduardo Delgado. She also studied at the International Academy Friedrich Wilhelm Schnurre in Sion, Switzerland in 1991 and has performed concertos in the country. In 1996, Atsuko won the Top prize of the Masterplayers International Music Competition in Italy. Her talent has been noticed by the president conductor Maestro Schumacher.
“This phenomenal Japanese pianist has played to standing ovations. One of the greatest pianists I have ever heard !” (Richard Schumacher)
Since 1997, she has performed in Europe every year, especially Piano Concertos with Sudety Philharmonic in Poland.
“Extraordinary technique exceptional sound and dynamic impetuous temperament” (Walbrzyski Tygodnik,Poland)